August was a damn good month where I got an annoying little bug inside me urging me to get out and do something cool with the camera and other people.  There have been more wanderings around the City of London as well as a trip back home to Wales and some snaps at the top of the highest peaks in the Brecon Beacons but I’m not gonna talk about that today.

A couple of weeks ago I arranged what I hoped would be an awesome edgey shoot in an urban setting.  Nothing over the top, nothing fancy, just a chance for me to get out with the camera, try out some portrait techniques, think up some ideas, get inspiration from other urban shoots that I like, and work on interaction with other people.  I honestly feel like out of all of the different aspects of photography, working with models or just asking people to pose must be my biggest weakness.  When I take photographs of people I like them to just do what they do and I’ll capture the moment.  That’s how my wedding style goes and I think it works well.  In reality, there are going to be lots of times when I need to be giving direction, so this urban shoot was going to be a step towards getting to be where I want to be.

So it’s Monday evening and I’ve arranged to catch Megan in town at the old bus station with the aim of getting about the last hour of light before looking for artificial light in the form of whatever Milton Keynes can provide for free.  I’d been watching quite a few Behind the Scenes videos of this kind of thing, from America and Australia, and really wanted to test myself.  So I did.

We started at 1830 as the sun was getting ready to dip behind the train station’s office block but actually put ourselves in the shade.  The light was still surprisingly good and as I was using a nifty fifty (50mm prime lens) with the aperture pretty wide open, I could keep the ISO on or close to 100.

We lifted off and warmed up with some nice simple shots near some railings and a mirrored part of the building.  There was also a long clean grey wall that we used for some fancy shallow focus shots with Megan a short distance away, and also for a wide flat shot to work on the rule of thirds.  The nearby fire exit was metal and surprisingly clean so we tried a few snaps around there and the best ones definitely contained attitude. 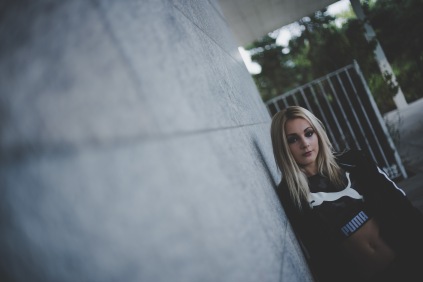 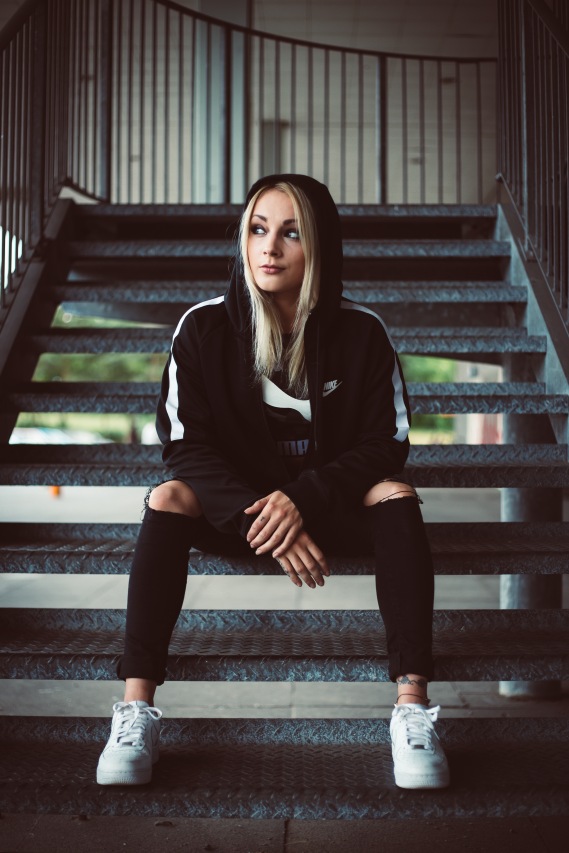 There’s a good amount of graffiti in just one corner of the area that we used but that area happens to be a skate park and was fairly busy that evening.  We decided to skip it and maybe come back to it later.  For now though the light was definitely dropping quickly so we’d have to find some artificial light.  The multistorey car park was the obvious first option.

We took 2 cars and looped round and up and round and up until we got to an eerily quiet level and parked up.  We needed more attitude, so the hood came up for most of our shots, I was shooting with black and white in mind so really thinking hard about the light, the shadows and leading lines.  I wasn’t carrying any fancy equipment because I don’t have any.  Gordon Ramsey only needs one pan to make his magic, right?  We just took advantage of whatever was available to us there and then.  We also kept the posing really simple because a) I’m not great at directing and thinking of poses yet, and b) I’m not great at directing and thinking of poses yet.  Most of my direction was to myself just thinking about angles that work and directions of light.  Megan did the rest.  At one point I just asked Megan to simply listen out for my click and change her pose slightly each click whether it be a hip movement or a hair flick or a hand gesture or the direction of her eyes.  The results are below!

Megan was absolutely fab to work with, very professional and easy going at the same time.  If you’re a photographer and would like to work with her, just hunt her down on instagram @meganastasiaa and I’m sure you won’t regret it.  Tell her I sent you!  Megan is new to modeling and pushing herself towards a career in fitness but you can see here she can create some fantastic looks with the right photographer.  If you’re looking for a model for your sports brand, you don’t need to look any further.

With that, if you are looking for a photographer to help capture some cool images of your brand, or maybe you just fancy a funky photoshoot for yourself or want to get started in modeling, or a family portrait with a difference, or whatever it might be, get in touch and find out what my very decent rates are.  We can chuck some ideas around.  I have a smoke grenade that I really want to use soon!

Oh and while I remember, I have a new instagram handle  @iamtheinstadan

Be sure to say hi!